Pet Chauffeur has been around for more than 20 years providing outstanding pet transportation services all over the world. As such, our company has been featured in numerous publications throughout the years. We were also able to collect a number of blogs and articles about the company. With topics ranging from our canine transport and travel in NYC to other tidbits detailing some significant events in our company and our other services, you will find good reads that may also be helpful to you.

Read our articles below to find out more about us and our journey throughout our years of service. 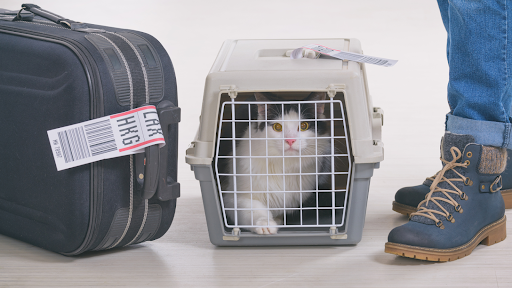 Traveling with a pet outside the country needs medical protocols and legal paperwork that an owner must fulfill if the trip is to go without a hitch. With all the preparations required for the journey, it’s important that you don’t forget to have the long checklist of what are to be done in relation to your dog, cat or whatever your domesticated animal is. You can attend to the items in the inventory yourself or you can avail of pet transportation services in New York City.

END_OF_DOCUMENT_TOKEN_TO_BE_REPLACED

At an Indoor Pet Spa, Why Let the Dogs Out?: New York Times, by Julie V. Iovine

A Cab For Your Lab: New York Post, by David Serchuk

Cities Will Talk to the Animals by Going Orange: USA Today, by Sharon L. Peters

At the time, Lang delivered prescription pet food for high-end veterinarians. The vets told Lang their clients lacked transport for their animals around Manhattan. Lang was surprised. “I didn’t even know there was a problem with it,” he said, “because I didn’t live in Manhattan.”

Lang realized that no matter the economy, people spend money on their pets. Then he took a closer look at his clientele and realized their problem: Few city pet owners drive and fewer cabs take Labrador retrievers.

For Lang, it made sense. If it’s hard for you to get a cab, try getting one for you and a rottweiler. Not to mention that most cab drivers won’t take any animals because the animals might “do business” in the car, he said.

Also, many cabbies have issues with pooch passengers.

“If you ask them, they’ll say dogs are dirty, and we will not put dogs in our car,” he said, adding, “I love it that they hate them.”

In just four years, Pet Chauffeur has gone from one van to 11, and the company’s 20 employees ferry from 20 to 40 people and pets daily.

Their orange vans carry animals either in crates or roaming in the back. Animals can also go with or without their owner.

One reason for the company’s good health, Lang noted, is that his clients are among the wealthiest New Yorkers. Robert De Niro and his Burmese mountain dog are regulars. Janeane Garofalo, Sean “P.Diddy” Combs and Janet Jackson also use the company.

Non-celebs use it, too. Bruno Lauder and his large poodle, Indi, use Pet Chauffeur to ferry them from his Manhattan home to his Queens business daily.

Last year, Lauder spent $12,000 with the company. Lauder uses Pet Chauffeur because Indi gets car sick, and the company’s drivers are trained to drive smoothly. “David spends a lot of time explaining to them that they cannot be race drivers when you drive animals around,” Lauder said.

While 90 percent of Lang’s business is dog owners, he will transport any animal. A giant bearded dragon lizard was a customer – in a crate the size of a coffin – as were a pair of chimpanzees.

Now Lang wants to expand. Last summer, the firm did long-distance pet-relocation drives on a trial basis, with a pair of bulldogs going to L.A. for $6,100

Pet Chauffeur also has gotten into international animal shipping. After September 11, this has become tougher since airlines investigate every package.

The company does all the paperwork and even books the tickets for its customers. This might seem excessive, but as Lang knows, some pet owners will do anything for their pets. Or at least pay someone else to.

Vicki Ungar gave up yelling, “Hey, taxi!” to go across town with Molly, her lovable cocker spaniel.”Ten taxis will pass you before one will stop. I guess most don’t like people with animals,” said Ungar, a pet hospital manager who travels to work with her pooch daily.

David Lang, owner of Pet Chauffer, picks up another fare. Ungar gets Molly there using Pet Chauffeur, one of the city’s pet-transportation companies that allow humans along for the ride. Animal lovers who travel with sizable dogs, as well as iguanas, ferrets and other exotic critters, have turned to such companies after being banned from most other modes of public transport.
Cabbies take the most heat for passing on pets, objecting because of their size and even for religious and cultural reasons. Many drivers can’t handle fur. “I’m highly allergic to cats, I choke,” said Fernando Mateo, president of the 30,000-member New York Federation of Taxi Drivers, representing livery cabs. But the biggest objection comes from the potential backseat cleanup.

“Cab drivers don’t like to stop for pets because they fear they might do their business in the car,” said David Lang, owner of the Long Island City-based Pet Chauffeur. Potty accidents are no problem for Lang, whose five-minivan fleet comes prepared for cleanups. Lang charges varying rates around town, starting at $25 for 1 to 40 blocks. He also will go out of state. Locally, owners travel free and crates are not usually required.

Ungar calls ahead to schedule her 15-minute ride to work at the Park East Animal Hospital in midtown. Drivers usually arrive early, she said, and often will tune into Molly’s favorite jazz and classical stations for the ride. Dog and owner make at least 10 trips a week, pricey for Ungar since she started taking Molly to work in January. She declined to discuss how much she pays, but explained that 12-year-old Molly has cancer. “She’s very special, and a great companion,” said Ungar, who was recently divorced. “I’ll really do anything for my dog.”
Pet movers make trips to the vet, hospital, groomers, doggie day care, airports and New York’s animal havens.

“I take a customer three times a week from Tribeca to Central Park with her giant, beautiful German shepherd, Harley!” said Larry Reilly, owner of the Manhattan-based Pet Taxi. Reilly also offers tempting excursions to grassy country settings near mountains and lakes, and provides weekend service to the Hamptons. “Reunite yourself and your dog with Mother Nature,” he urges on his Web site, “Meet other pet owners who want to give their pets a better life.”

In 1999, Gail Pierangelino, a former deli owner and groomer from Manhattan, started a one-woman pet-travel business called Petex. Ever since, she has found customers who wouldn’t travel any other way with their animals. “They have no worries,” said Pierangelino, 47. “They call me up, and I’m there. It’s like having a private car for you and your animal.”